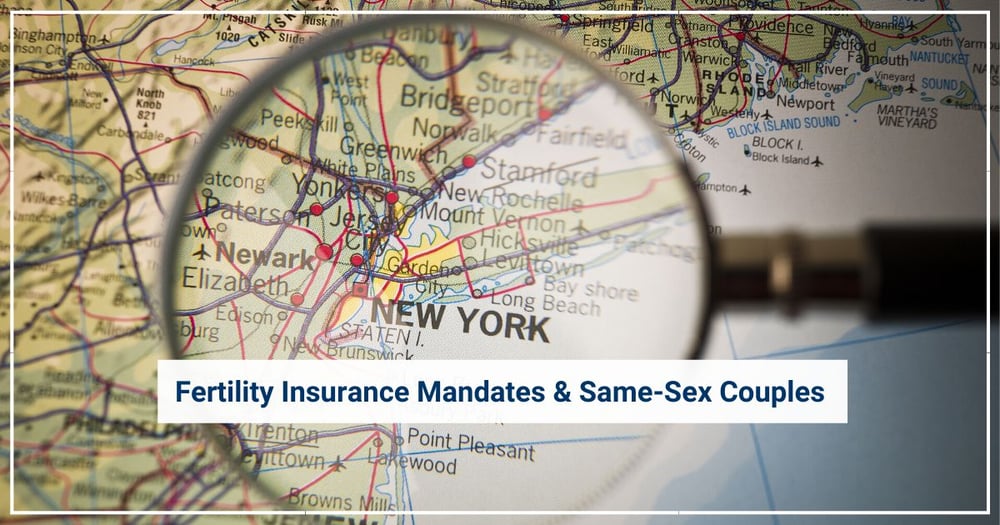 Expanded State Infertility Mandates Show Promise for Same-Sex Couples, Here’s What You Need to Know to Get Coverage

The state of New York has joined the ranks of 17 other states that have mandated insurance providers cover fertility treatment, effective January 1, 2020. In New York, specifically, all Large Group insurance providers will cover up to three cycles of IVF for people with a diagnosis of infertility. The mandate also requires insurance plans to cover egg and sperm freezing for medically necessary purposes, including, but not limited to sickle cell anemia, cancer diagnosis, and surgery for endometriosis. The mandate, however, leaves out providers in fully-insured Small Group plans (companies with less than 100 employees), employers with self-insured plans, Obamacare, and Medicaid.

How Does The New York State Mandate Affect Same-Sex Couples?

The new mandate opens the door for same-sex female couples and single moms-to-be as it addresses therapeutic donor insemination. According to the mandate, couples are eligible for coverage based on a rather narrow, clinical definition of “infertility” - the inability to conceive after a certain period of unprotected intercourse or donor insemination. While this is most definitely applicable to single moms or same-sex female couples, it excludes LGBTQ couples whose journey inherently requires IVF and surrogacy - the method of biological family building for most dads-to-be.  The definition of fertility had always focused on “medical infertility.”  In order to be LGBTQ inclusive, the new definition must also cover “social infertility,” which encompasses infertility due to factors associated with their partner.

While the mandate does prohibit discrimination of insurance coverage on the basis of age, sex, sexual orientation, or marital status, it does not explicitly make mention to LGBTQ persons. While the language of the New York state mandate is not exclusive, it leaves much to be desired when it comes to fully inclusive benefits, especially for gay men whose family-building plan involves surrogacy.  If the mandate is not specifically inclusive, there will always remain an argument that coverage for all LGBTQ individuals and couples attempting to have a family fails to fall into the existing definition of “infertility.”

Let’s not forget that New York remains one of three states where compensated surrogacy is actually illegal, making it more challenging for couples that require a surrogate to access care (whether they’re same-sex or hetero).

Same-sex couples have been excluded in almost every state-mandated fertility treatment coverage plan with the exception of Maryland, who’s previous laws were once of the most restrictive in the nation. The Maryland law previously mandated that couples demonstrate a history of infertility of at least two years’ duration, and insurers often interpreted that to mean having intercourse during that time without conceiving. In addition, by law, coverage would be permitted only for infertility treatments that used the husband’s sperm. Under a new law, those restrictions have been eliminated for married same-sex couples. It also prohibits insurers – when they cover other types of fertility treatments — from applying those conditions to same-sex couples. The law doesn’t change the IVF coverage rules for married, heterosexual couples.

Unfortunately, the previous laws and definitions regarding infertility lacked foresight, and no one realized the language was exclusionary for those who have same-sex partners. More and more we are seeing lesbian, gay, bisexual and transgender communities lobbying for equal access to the financial help married, heterosexual couples enjoy under state law. If you work next to someone who has an opposite-sex partner, your LGBTQ coworker should have the same fertility benefits, and corporations are listening.

Companies have begun offering inclusive benefits as a means to attract and retain top talent.  Recently, Starbucks announced expanded fertility coverage to be inclusive of all employees (LGBTQ) and boosted reimbursement maximums. Working with third party benefits providers, several Fortune 500 companies now offer reimbursement for surrogacy costs. This is a step in the right direction when it comes to equal benefits and fertility coverage for LGBTQ persons.

Additionally, there are more than 100 large corporations from varying fields of business that offer inclusive benefits including Pepsi Frito Lay, NBC Universal, Amazon and Google. One of the leaders in the space, Progyny, offers inclusive fertility benefits in addition to a company’s medical benefits package - an add-on that many employers have realized is a necessity. Progyny currently works with companies, in both the public and private sectors, that want to ensure equal fertility-benefit access for LGBTQ persons.

While there are major strides yet to be made in fertility equity for all people, the laws are trending in the right direction.  These small steps, plus your voice, and speaking up for the rights of all people struggling with infertility, will hopefully and eventually create equal ground in fertility coverage for all.

If you're interested about how to make the most of your fertility coverage, check out this list of 4 questions to ask your HR department about LGBTQ insurance.

Want to know how to optimize your own fertility benefits? Read more here: