HIV+ Family Building for Dads To Be

Gay Parent To Be is proud to provide family building options to allow HIV+ couples to have a genetically linked child. Our medical team uses the Bedford SPAR protocol to treat affected men. 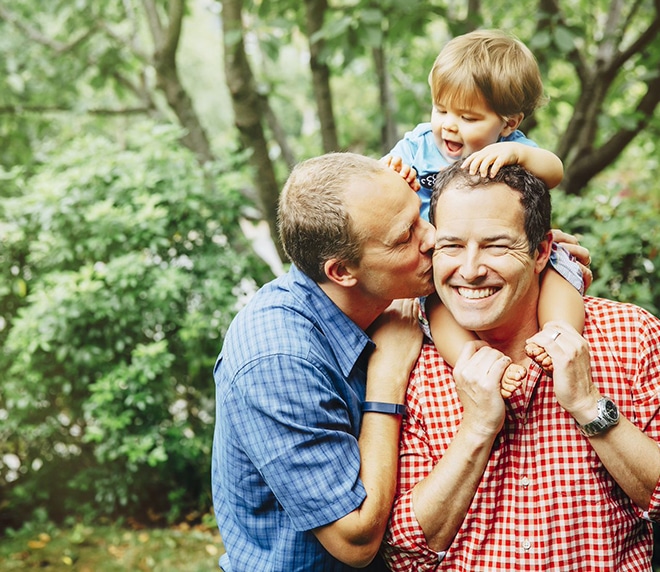 The Special Program of Assisted Reproduction (SPAR) is the only program in the world that uses highly sensitive PCR tests for HIV in semen to minimize the risk of transmitting the infection to the child or gestational surrogate during assisted reproduction. Testing the semen sample directly is advocated as it has been shown that the amount of HIV virus in a blood sample is not representative of the presence of the virus in the semen sample.

Data collected by this team of researchers has found that approximately two-thirds of semen specimens produced by healthy, HIV infected men have an undetectable amount of HIV virus. Sperm from such specimens are safer for use in assisted reproduction than “washed sperm” from untested specimens, or from specimens that test positive for the virus. Men whose sperm tests negative for the virus can have their sample frozen and shipped to Gay Parents To Be for later use with assisted reproductive technologies.

Although there have not been any cases of infection by utilizing this technology, we will thoroughly counsel your gestational carrier at the time of her consult of the theoretical risk and assure that she has the information necessary to make an informed decision to proceed with the cycle. Should she decide to proceed, the current SPAR protocol is for her to be tested for HIV antibodies at multiple points during this journey.

Personal Support For Your Journey

Participation requires that you speak to Dr. Ann A. Kiessling in regards to the science and technique of Bedford SPAR. Dr. Kiessling, a member of the Harvard Medical School Faculty, is the Director of the Bedford Stem Cell Research Foundation. After spending twenty-seven years at Harvard Medical School faculty, she has decided to devote her full attention to the initiatives of the foundation, including stem cell research and semen transmission of HIV.

Once you are a participant in the program she will also speak to your gestational carrier. It is our experience that her involvement helps gestational carriers feel comfortable moving forward in the family building journey with HIV+ men. Working with this leading scientist